In the 1800s, Cincinnati was one of America's most prolific brewing cities. Cincinnatians drank more beer per capita than any city in the country (2 1/2 times the national average), and Over-the-Rhine was the epicenter of beer production and consumption. By 1890, the neighborhood was home to roughly 300 saloons and had over a dozen and a half breweries within or adjacent to its boundaries.

Bock Beer is traditionally brewed for special occasions. It is complex, hardy, traditionally has a higher nutritional content than most beer and typically has a higher alcohol content. It has a particular link to spring because German monks drank it as a substitute for food during Lenten fasts. The style was popular in pre-Prohibition Cincinnati and the numerous breweries all made a seasonal version around Lent. This history gives rise to the modern Bockfest. 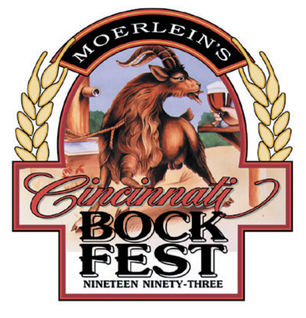 Bockfest was created by the Hudepohl-Schoenling Brewing Company to celebrate the brewery's introduction of Christian Moerlein Bock. Prior to Prohibition (1919 in Ohio), Christian Moerlein was the largest brewery in the state and one of the five largest in the nation. Despite its size, the brewery did not re-emerge after Prohibition, but the Hudepohl Brewing Company, originally founded in 1885, did return. Hudepohl was a local favorite for decades. Most Cincinnatians know that, but surprisingly few understand the company's role in helping give America better beer. In 1981, Hudepohl recognized an untapped market in craft beer. The company became one of the first two craft beer producers in America (Anchor Steam in California was the first.) The craft beer line was produced under the resurrected name Christian Moerlein to pay homage to Cincinnati brewing history. The beer was sold with the tag line, “quite simply a better beer” and became the first American beer to pass “Reinheitsgebot,” Germany's stringent beer purity law. In 1993, the Moerlein line of craft beers was expanded to include a bock. The company decided to turn the launch of the beer into an entire festival celebrating Cincinnati 's brewing heritage, including a parade. The parade started at Arnold's Bar & Grill because Arnold's is both the city's oldest saloon as well as being the first place to serve the twentieth century Christian Moerlein beer.

With the work and dedication of Hudepohl, bar owners, Over-the-Rhine residents, and non-profit organizations like Merchants of Main Street, the tradition of Bockfest was carried on through subsequent years. During the festival's history, Hudepohl fell on hard times and Bockfest was kept alive largely due to the once-beloved (but now defunct) Barrel House Brewery. When Barrel House left Over-the-Rhine in 2005, the future of Bockfest was placed in question, but a small number of people refused to let that happen. The festival was maintained and, through a great deal of hard work by a number of OTR proponents including the non-profit Brewery District CURC, has grown significantly in the years since 2006. Brought from the brink of death, it now draws attendees from both near and far. 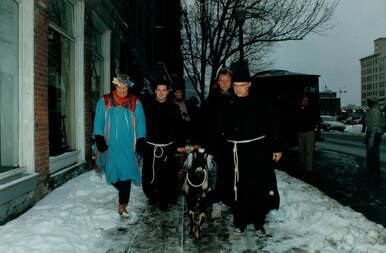 Francie Patton, marketing director for Hudepohl-Schoenling, and Terry Carter of Neon’s put their heads together about launching the new product Moerlein’s Cincinnati Bock Beer in the emerging Twelfth and Main Street area of Over-the-Rhine. (Her other choice was Mt. Adams.) And the rest is history!

There weren’t so many businesses then in Over-the-Rhine, so everyone had to rise to the challenge to make this an important event!

Merchants of Main Street was formed in January 1993 as a State of Ohio non-profit to receive Hudepohl Schoenling’s funds for rolling out their new Moerlein’s Cincinnati Bock beer. Elmer Grossheim, member of Old Saint Mary’s board and attorney filed the documents for the group. President: Julie Fay, Secretary: Marta Hewett, Treasurer: Bill Baum.

The date of the BockFest was set to be the weekend before Lent began. A flurry of wild brainstorming sessions ensued. Ideas came from everyone in the group…the wilder the better! 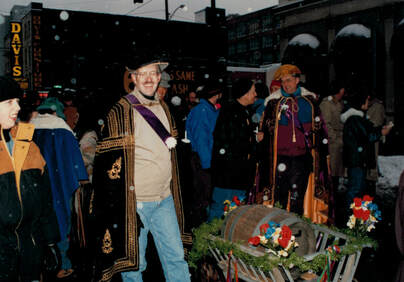 The word “bock” being German for “goat” and a goat appearing on every label for Bock beer, it was determined that the first barrel of Bock would be transported by goat cart from the oldest bar in town (Arnold’s) to the oldest church (Old St. Mary’s) to be blessed before it was consumed. This would be done in a procession or parade with much pomp and circumstance.

In addition to the obvious German theme, the parade theme would be Middle Ages or Renaissance, as Heidi Lucci, representing Old St. Mary’s German community, said “Ah! People get tired of too much oomp-pa-pa stuff!.” So, authentic German attire was complimented with costumes rented from Schenz. Monk’s robes were borrowed from Father Jim Bok from St. Francis Friary by Sonya McDonald.

Francie put out lots of publicity about the new Bock beer, and Julie Fay put together a complete description of the Bockfest in a multipage insert in the Downtowner, with many articles describing aspects of the upcoming celebration, a map, shuttle, and listing of all of the bars, their menus and music for the Fest. Michael Frasca of Spring Street Pottery fashioned a dark blue and white tap handle for each participating bar. He also designed a handsome matching tankard that was available for purchase at Neon’s. All bars had an entry in the parade, served the sponsoring Bock beer, had a monk serving either as a bartender or a bouncer, and sold commemorative t-shirts. The Over-the-Rhine Chamber raffled off a weekend in Over-the-Rhine. In 1993 there was much skepticism as to what this might be!

The parade would rally at Arnold’s on Eighth Street by 5 pm. (In reality, festivities and camaraderie took over for much of the afternoon!) Everyone would have time to have a quick beer (but not unblessed Bock), and get the celebrities into their rental Renaissance costumes: Jim Scott of radio fame would be the Grand-Marshall; Joe Peining, Hudepohl-Schoenling’s brewmaster, would be the Bockfest King, (it seems German events always have a “king.”), and Jim Tarbell, proprietor of Arnold’s at the time, would carry the Bockwurst, the delicate early spring sausage hand-crafted at Avril’s on Court Street.

Tended by Monk’s, the Sunrock Farm goat and cart bearing the first keg of Bock beer waited patiently on the sidewalk out front, as did a group of student band-members from SCPA. The police would not allow the disruption of traffic on the Downtown streets, so parade was only permitted on the sidewalks until we crossed Central Parkway! The one factor not worked out was the weather, and 4-6 inches of snow greeted the celebrants!

The parade would step off at 6 pm. turn right on Main. Banner-bearers announcing the coming of the Bock. musicians, beer–can costumes, goats, monks, folks in authentic German drindles and lederhosen, wenches and beggars, elegantly dressed Renaissance people, all sloshed along the East sidewalk, waving to the cheering crowd of medieval urchins at Carol’s Corner Café on the West side of Main.

Each bar would have an “entry” in the parade, whether a gaggle of costumed beer lovers or a “float” to join in North of Central Parkway

Once across Central Parkway, Hudepohl’s antique Beer Wagon, pulled by their draft horses, joined the parade. The Lichtendahls, owners of Hudepohl-Schoenling, rode in the wagon, with Dan Dell of Rhino’s on the back of the wagon, providing Baroque Music blaring from his state-of-the-art boom-box. 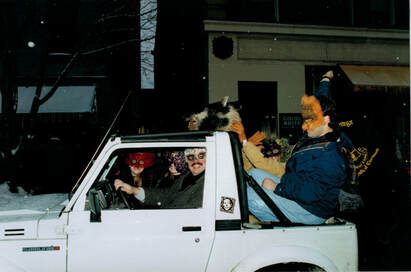 Through the snow-filled streets came Liberties’cart bearing a regally attired dog, pulled by another dog and several Medievalists. Kaldi’s jeep with harmonica player and large sack of coffee on the roof; Courtyard Café’s wagon with a goat cut-out and pulled by a tall willowy female monk; Rhino’s truck with  hay bails? Grammer’s and Milton’s are also represented, as is the German-American Citizens League.

The parade proceeded past “Bockfest Hall” set up for the weekend in the old vacant  Tower Furniture Building, owned by Terry Carter. Past crowds of monks and urchins at Kaldi’s Coffee House, passed the “Opening Soon” Courtyard Café, past proprietors waving from the art galleries on Main, turning over Melindy Alley at Liberties, with their grill going out front, roasting turkey drumsticks for a Middle Ages treat, then down the very desolate Clay Street, arriving back at Thirteenth Street and a plaza-like setting in front of Old St. Mary’s Church.

The crowds swelled as the parade poured into the designated “town square.” and the church steps, waiting for the ceremonies to begin. Frau _____, of the Fairview German Language School, set up the Maypole, and her students took their places, each holding abroad spring-colored ribbon. As she started her tape player with the appropriate German music and clapped her hands in time, the dance students began weaving the Maypole. As there was a misstep, and she wanted it perfect, the tape was rewound and the dance began again. Thunderous applause rewarded the successfully woven Maypole and the students took a bow.

The crowd flooded into the church, many for the first time, gasping at the beauty of the oldest Catholic Church in Cincinnati. The stained glass windows with flower motifs, the magnificent woodwork and statues, the altar and paintings above, lighted by an arc of lights, the CCM musicians playing from the balcony. The church filled with a crowd as never seen before in this church, wearing all manner of costumes, and gazing all around to see the marvels. Marg Hammelrath, OTR Chamber of Commerce, and Julie Fay, Merchants of Main Street OTR, relish the reaction of the everyone! 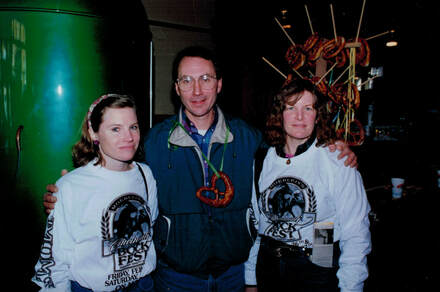 The ceremonial barrel of Bock is brought up the step and into the sanctuary by a medieval-costumed Scott Carter and attendants. Jim Scott serves as master of ceremonies. Mayor Roxanne Qualls reads the Mayorial Proclamation naming Bockfest weekend, a celebration of bock beer, bockwurst sausage and hope for the coming of Spring. She also praises the small businesses and craftspeople who have come to bring new life to Over-the-Rhine. Francie Patton tells us of the creation of the new Moerlein’s Cincinnati Bock and Brewmaster Joe Peining presents the first keg of Bock Beer to be blessed. Rev. Dohrman Beyers, pastor of Old St. Mary’s blesses the Bock with the blessing brought back from Austria by a parishioner and translated into English just for the occasion. Father Beyers then gave one last wish. He dispensed all of the Catholics from not eating meat on Friday so they could enjoy the Bock sausage and other special bock feasts prepared for the evening! The crowd is then dismissed with a command to go out and eat drink and be merry. Prosit!

People dispersed through the snowy streets to the various bars, restaurants and BockFest Hall to drink the Bock and enjoy the cold February evening.

​On Saturday afternoon, BockFest Hall hosted informative cultural presentations arranged by Don Tolzmann, as we began to get a peak into the German and beer heritage of Over-the-Rhine. Bock was served, starting at noon. and live music led into a night of dancing and celebration, the budget was stretched through Jim Tarbell’s success in getting Harry Garrison’s player piano band machine for afternoon music. Katie Laur entertained and the Beaumonts played in the evening. The streets were bustling throuout the night, from Arnold’s to Milton’s, Neon’s to Grammer’s, Carol’s Corner Café to Rhino’e to Kaldi’s the likes of which had never been seen before.

The committee of bar owners, staff and Main Street merchants held an impromptu wrap-up brunch of leftovers at Grammer’s on Sunday morning. As all reveled in the success of the launching of Moerlein’s Cincinnati Bock, plans were underway for a repeat performance next year!